How do Organisms Reproduce 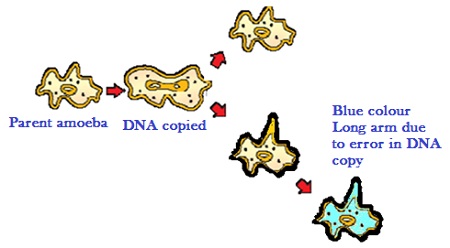 DNA copying is an important phenomenon of reproduction through which the organisms pass on their characteristics to their offspring. It maintains the characteristics in different generations of the species. It also produces variations which are useful for the survival of species for long time.

2. labelled diagram of the of a flower. 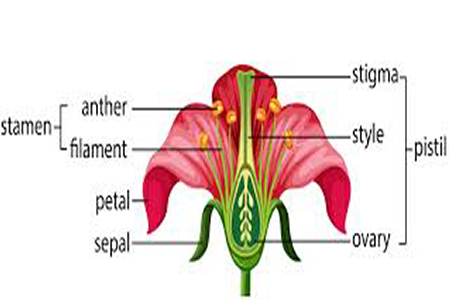 The parts present in the flower are Stalk, Sepals, Petals, Stamen and Pistil. The description of each part is as follows:

Stalk: It is the base on which the flower grows.
Sepals: They are green leaf like structure located above the stalk, which protects the flower during its bud stage.
Petals: The brightly colored flower part is called petals. It attracts the insects for pollination.
Stamen: It is also known as androecium or male reproductive part of the flower. It comprised of anther and filament. In anther, pollen grains are present in specialized region called pollen sac.
Pistil: It is known as Gynoecium or female reproductive part of the flower and is composed of stigma, style and Ovary. It is stigma on which the pollen grains gets attached and moves through the style and reaches ovary where fertilization occurs. 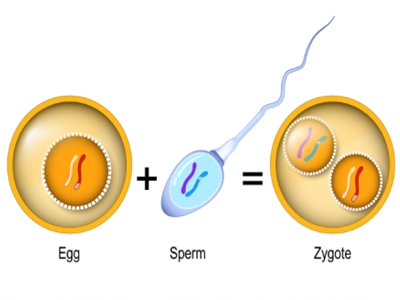 Fertilization is defined as the fusion of a mele gamete (sperm) with a female gamete (ovary) to form a zygote by sexual reproduction.

Human fertilization is the union of a human egg and sperm, usually occurring in the ampulla of the fallopian tube. The result of this union is the production of a zygote cell, or fertilized egg,  initiating prenatal development. Scientists discovered the dynamics of human fertilization in the nineteenth century.

The process of fertilization involves a sperm fusing with an ovum. The most common sequence begins with ejaculation during copulation, follows with ovulation, and finishes with fertilization. 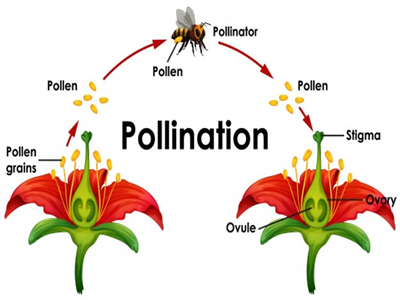 Pollination is the transfer of pollen grains from the anther of a stamen to the stigma of a carpel. These are transferred by agents such as insects, birds, wind or water.

Pollination is the transfer of pollen from a male part of a plant to a female part of a plant, later enabling fertilisation and the production of seeds, most often by an animal or by wind. Pollinating agents are animals such as insects, birds, and bats; water; wind; and even plants themselves, when self-pollination occurs within a closed flower. Pollination often occurs within a species. When pollination occurs between species it can produce hybrid offspring in nature and in plant breeding work.

Q1.   How does binary fission differ from multiple fission?
Ans. Binary Fission:  ("division in half") is a kind of asexual reproduction. It is the most common form of reproduction in prokaryotes such as bacteria. It occurs in some single-celled Eukaryotes like the Amoeba and the Paramoecium. In binary fission DNA replication and segregation occur simultaneously. e.g., Amoeba.
Multiple Fission: It is an asexual method of reproduction in organisms like sporozoans, algae, plasmodium, etc. In multiple fission, the parent organism splits (or divides) to form many new organisms at the same time. The term ‘multiple’ means ‘many’ or ‘several’. So, multiple fission means ‘splitting into many’ or ‘splitting into several’. This happens as follows : Sometimes (particularly during unfavourable conditions), a cyst or protective wall is formed around the cell of a single-celled organism (like that of plasmodium).

Q2.   How will an organism be benefited if it reproduces through spores?
Ans. During adverse circumstances spore remain coated are meant to tide over layer. This helps an organism survive adverse conditions. Spores are means to tide over bad phases.

Q4.   Why is vegetative propagation practised for vowing same types of plants?
Ans. The process by which some plant can reproduce asexually It has their vegetative pars like roots, stems and leaves is called vegetative propagation.
Plants raised by this method can benefit flowers and fruits earlier than those produced from seeds.
Plants that have lost capability to produce seeds like banana, organge, rose and jasmine can be propagated. All plants produced are genetically similar to the parent plant.

Q5.   Why is DNA copying an essential part of the process of reproduction?
Ans. DNA copying is needed because information stored in DNA is used to e make protein. Synthesis of different proteins will lead to altered body design. Thus, reproduction at its most basic level involves making copies of the blueprints of body design.

Q10.   What are the advantage of Sexual reproduction acre Asexual reproduction?
Ans. In Asexual Reproduction, the offspring is almost identical to the parent because they have the same gene as their parent. Thus, variation is not present.
Sexual Reproduction involves fusion of male and female gametes. The offspring exhibits diversity of characters because they receive some genes from the mother and some from the father. The mixing of genes in different combinations, results in genetic variations. This variation leads to the continuous evolution of various species to produce various organisms.

Q11.   What are the functions performed by testis in human beings?
Ans. The function of testis is to produce sperms and male sex hormone called testosterone.

Q12.   Why data menstruation occur?
Ans. Menstruation occurs in females when the egg produced inside the cervix is not fertilized. Since the egg does not fuse with the male gamete, so the thick and soft lining of uterus having a lot of blood capillaries in it are not required. This unfertilized egg dies within a day and the lining breaks down shedding blood along with other tissues. This comes out of the vagina in the form of bleeding.

Physical Barrier Methods: Use of condoms, diaphragms, cervical caps can be used. These prevent the entry of sperms into the female genital tract by acting as a barrier between them.
Chemical Methods: Oral pills can be used which change the hormonal balance and stop release of egg. Vaginal pills kill the sperms.
Surgical Methods: This includes vasectomy (sperm duct is removed) in males and tubectomy (removal of small portion of fallopian tube) in females.

Q15. How does reproduction help in providing stability to the population of species?
Ans. Stability is provided by equalizing the birth and death ratio. Thus, the rate of birth should approximately be equal to the rate of death.

Q16. What could be the reasons for adopting contraceptive methods?
Ans. The reasons for adopting contraceptive methods could be:
1. Protection from sexually transmitted diseases such as HIV-AIDS, gonorrhoea, syphilis, warts etc.
2. Restricting the number of children.
3. Sufficient gap between successive births.
4. Enjoying a good reproductive health.
5. Controlling population.