Hindi is the first official language of India. The history of the Hindi language is considered to be about a thousand years old. The Hindi word is believed to be related to the Sanskrit word Sindhu. 'Sindhu' used to call Sindh river and on that basis, the land around it started to be called Sindhu. This Sindhu word became ' Hindu', Hindi and then 'Hind' in Iranian. Later, Iranians gradually became familiar with more parts of India and the meaning of the word expanded and the word Hind became the sign of the whole of India. Hindi shares its roots with other Indo-Aryan languages such as Sanskrit, Urdu, and Punjabi, as well as Indo Iranian and Indo-European to communicate with over 1 billion people on this planet and become immersed in a rich language and culture. Learning the Hindi Alphabet Become familiar with Devanagari Script. Devanagari is a compound of "deva" देव and "nāgarī" नागरी. Deva means "heavenly or divine" and is also one of the terms for a deity in Hinduism. It is a phrasing with lipi ("script") as nāgarī lipi "script relating to a city", or "spoken in city". The use of the name devanāgarī emerged from the older term nāgarī. Devanagari is an abugida alphabet of India and Nepal and is the main script used to write Hindi, Marathi, and Nepali. Hindi is written in Devanagari script. It is also called Nagari. Devanagari has 11 vowels and 33 consonants and is anusvara, nasal and visarga and the script has no concept of letter case. It is written from left to right, has a strong preference for symmetrical rounded shapes within squared outlines and is recognisable by a horizontal line that runs along the top of full letters that links them together. 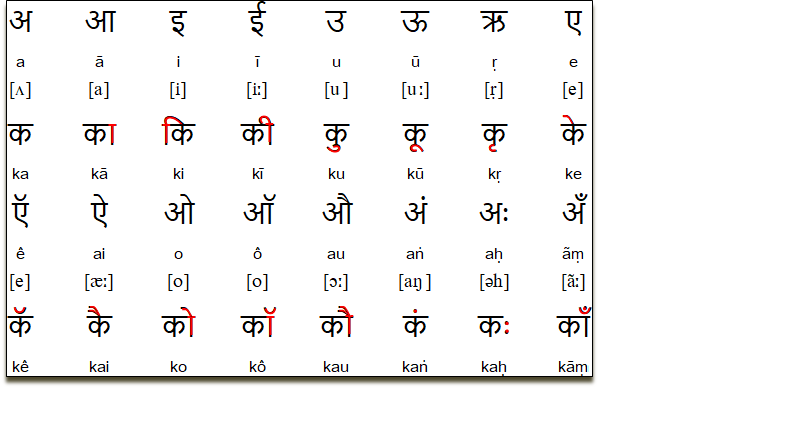 Study the Hindi Consonants: Consonants and Vowels are the most basic things in the Hindi language. There are 33 consonants in Hindi. They are organized in the alphabet by how we use our mouth and throat to pronounce. Because Hindi has more consonants than English. You will notice that ङ and ञ do not have any examples, this is because these two letters although part of the Devanagari script are not part of any Hindi words. They are used in other languages such as Sanskrit and Marathi, which are also written in the Devanagari script. 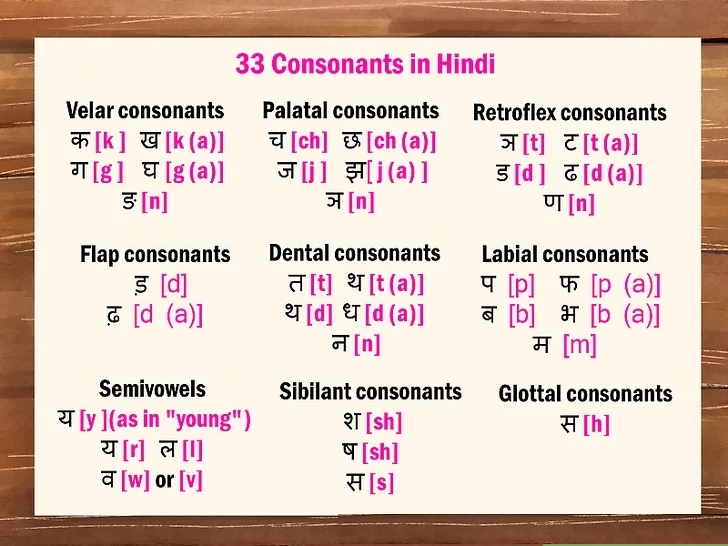 Velar/Kanthya Consonant: The (a) next to some consonants indicates that they are pronounced as aspirated (i.e., with a strong breath of air such as p in "pit" or "puff"). Velar(kaṇṭhya) consonants, pronounced by using the back of the tongue at the roof of your mouth (e.g., k or g in English): क k, ख kh (a), ग g, घ gh (a), ङ da.

Dental (Dantya) Consonants: Dental (dantya) consonants, pronounced by touching the tip of your tongue behind the back of your upper front teeth (e.g., th in "thin"): त ta, थ th (a), द da, ध dh (a), न n

Hindi consonants have two basic different ways of pronouncing them: voiced and unvoiced. Reading explanations for these pronunciations may seem a little complicated, but don't worry; once you start trying to practice the sounds, you'll be able to feel the difference between voicing and not voicing.

Voiced Consonants: Are pronounced by vibrating your vocal cords. For example, voiced consonants in English include w in "who" and f in "food".

Unvoiced Consonants: Are pronounced without vibrating your vocal cords. For example, unvoiced consonants in English includes in "chap" and b in "bitten".

Lower-case letters are used for unaspirated consonants and short vowels. You can have unvoiced unaspirated consonants, unvoiced aspirated consonants, etc. Aspiration is another term for a burst of air released through your mouth. The only way to understand how the speaking of words works in Hindi is to listen to recordings of Hindi Alphabets (Swar/Vyanjan). Listen to a recording of the Hindi alphabets from our app  for small kids and for the beginners to Learn Hindi by Hegodev Link::Hindi Alphabet-हिन्दी वर्णमाला and then try to mimic the recording. The Hindi alphabet may look a little alien to you, especially if you are a native English speaker, but with a regular practice, you'll be able to understand how to make and pronounce all the Hindi letter sounds yourself. Learn how to write the Hindi alphabet from the App. You may find it easier to learn the Devanagari script if you can see how it is written.