Stories for Kids | Poem for kids | Idioms and Phrases

Learn English by using our resources to quickly improve your Children's English. This website is created for Pre-primary and Primary Children's from the age of 3-12 years  of age. We have included activities to help kids practice their reading, writing and to recognize Alphabets and Vowels which are the bases of first step of learning.

Vowels:  A vowel is a sound that is made by allowing breath to flow out of the mouth, without closing any part of the mouth or throat.

There are 5 vowels in English Language, i.e.

In the English language, vowel can be pronounced in many ways but the two most common ways are Long and Short. How we can pronounce vowel in English depends on who is pronouncing it and where they are from. As you know there are an uncountable number of dialects worldwide.

Games are a fun way to teach your children the phonetic alphabet. It maybe challenging to learn every correct vowel pronunciation with so many rules and exceptions. Learning Phonetics is an extra step in correctly pronouncing words.

Consonants:   A consonant is a speech sound in which the air is at least partly blocked, and any letter which represents this. Consonants may come singly or in clusters, but must be connected to a vowel to form a syllable. 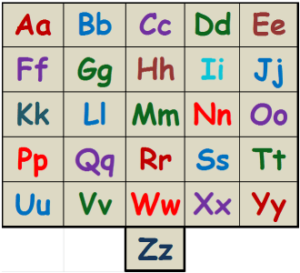 They can then be move on to read and write CCVC (consonant, Consonant, vowel, consonant) words such as drip, stop, gram.

Kids will also learn that sometimes two vowels are put together to make one sound, such as ai, oo, ea, ie which can be found in words such as main, hoot, lead and tie. When one sound is made by putting together two vowels are is called a vowel digraph.

They also learn that sometimes two consonants are put together to make one sound, such as th, ch and sh which can be found in words such as hath, ship and cash. When one sound is made by putting together two consonants is called a consonant digraph.

We may not make children aware of all the linguistic vocabulary. It is not so important that the children's must  know all these words or can define them, but the most important thing is that they learn to read and write individual letters and words with full confidence through phonics activities.

It is very interesting for kids to know that English language contains a vowel.